Save Your Seat Now
YES! Save My Free Seat Now
we will not spam, rent, or sell your information... 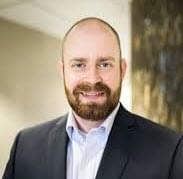 About Your Presenter
Benjamin Brandt is a CERTIFIED FINANCIAL PLANNER™ and Founder/President of Capital City Wealth Management, a Bismarck, North Dakota fee-only financial planning company. He is also the host of the popular podcast Retirement Starts Today Radio and the accompanying blog.
Over the past five years as a podcaster, Benjamin has grown Retirement Starts Today Radio to be among the top ten percent most downloaded shows in the world. By creating thoughtful and nurturing content, Benjamin's podcast now generates multiple prospective client introductions every month.
Recently, Benjamin was named as one of the top 40 financial advisors under age 40 by Investment News & listed as among the Top 100 Most Influential Advisors by Investopedia.
Benjamin is also an Iraqi combat veteran having served in the North Dakota Army National Guard for 8 years, including a 15 month deployment to Iraq in 2003.
You may have seen Benjamin featured in The Huffington Post, CNBC.com, Forbes, Business Insider, ClarkHoward.com, and many others.
In his free time, Benjamin and his wife Kristen can be found on the weekends at the hockey rink, or on the gymnastic mats, chasing their six energetic children.
If You are on a hamster wheel running your business, This MasterClass Is Going To Save Time Change Your Life
RESERVE MY FREE SPOT Limited Spots Available
CUSTOM JAVASCRIPT / HTML

Disclaimer: We make no claims or representation that by purchasing our course you will earn money or make your money back. This video presentation and the testimonials are hereby used for educational and exemplary purposes only, they are not intended to incite sales. While they may show real experiences from paying users of our course and products, their business’s results are not typical, and your business’s experience will vary based upon the effort and education of your business’s employees and management, the business model that is implemented, and market forces beyond anyone’s control.
NOT FACEBOOK™: This site is not a part of the Facebook™ website or Facebook Inc. Additionally, This site is NOT endorsed by Facebook™ in any way. FACEBOOK™ is a trademark of FACEBOOK™, Inc.
Advisorist®- ©2020 All Rights Reserved | 18601 Green Valley Ranch Blvd 108-222, Denver CO 80249
Terms - Support - Privacy - Refund